Its been a while since I added anything here. Regardless now we have got new stuff photoed and uploaded here. herehave been building and painting other stuff too, just being a bit lazy to take pics. I'll try to get my manners improved. Anyways, new orks can be found here. 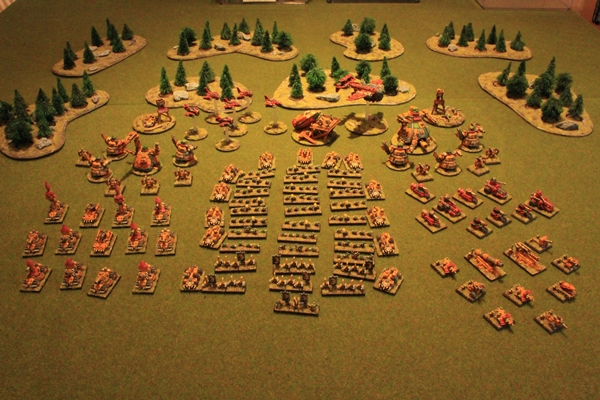 Something none of you have seen me do before

Even tho this page is about miniatures, there are miniatures some dont instantly think that those are miniatures but they are. Its been 25 years since I built model car last time. Once I wandered to toy shelves at local supermarket and one Revell Citroen 2CV model car jumped into my shopping cart and via desk till home.

Enough babbling, here are the pictures.


We are not DEAD, just silent

Lots of time has passed since my last update. I have been painting rarely and playing even less because my life has been hard fighting with my sickness. Sickness called EDS has reached point where it's really making my everyday life hard and tiring. Still it won't stop me from making plans and building toy soldiers.

There has been rumours about greenskins growing in numbers. Some orkish airplanes and mobile patrols has been seen but no bases or camps were found by imperial scouts.

Orks are not the only problem Pinos Luna system has encountered. After imperial college of xeno biology has found signs of epic artefacts hidden somewhere in Pinos Luna system, there has been raising traitor movement and increased number of xeno messaging in astral telepathics subways. It is possible that these movements escalate into size of a epic campaign.

Tons of pics and game reports are here.


Wall of teeth enters the field

I have spent my last three days on finishing my Squig Herd unit. It has been 13 figures short for a few months. Next tournament where I am attending is in two weeks and I want to use new toys on the battlefield.

I finished base today with small exception. I don't have burnt pale static grass so it's not completely finished. You can have a peek here.

My order on Forge World arrived this week and I have been washing figs and waiting for water to dry up. :) I might lose my temper if I would face the UPS guy who delivered my order. Why, you can read from here.

Cannon itself is waiting finishing touches and crew is less than 2 hours away. Here!!

First toy with Chaos Dwarves is under construction. I have added few WIP pictures.

It came so sudden. In the middle of a working day I had a sudden urge to buy one arachnarok spider. I checked myself out and went to local hobby store, bought one arachnarok and drove home. This mindless state stayed on and I spent all free time to clean, prep and paint the monster. It toke 2 evenings on prepping, 8 evenings on painting and here it is.

Last missing figure from my border patrol army got paint on him. Fresh goblin battle standard bearer joins rest of the force and prepares to be fielded against horrible humans and other stinky enemies. I toke some pictures with whole force in formation to throw challenge to anyone brave enough.

Month has passed since my last update. I have been painting almost every night, excluding few days when I was ill. My troll equivalents, Og-olls are from same era than most of my figs in army. Well, they are ogres because I dont have late 80s/early 90s trolls, tho I have 15 ogres. Also included my latest set of characters from 1200pts border patro l army. One fig short from 1200pts border patrol army. 9 figs short from 2400pts army. We are getting there.

Og-olls and goblin characters are here.

It wasn't that easy to accomplish this goal after I broke my right hand mid finger. It was crushed by bedroom closet door and I broke the furthest bone just beneath nail. I was incapasitated for two week. Now I have manage to finish 7 night goblin arrers, 8 fanatics and one shaman. Pics show only new fanatics and shaman because goblin arrers are like ones before so nothing new to see there.


Pair of Rock Lobbers are ready

Never leave home without one. If playing safe, make it two.

Too pretty to be shot at, too lethal to not to shoot at. Life can be difficult.

Squig Mangler can be found here.

Unit of wolf riders got new paints on them. Those were really fun to paint.


I can see light

My life has been difficult. I have been working way too much, so much that it has actually had impact on my health. Luckily spring came and light along it. Work hasn't got much easier but light has given me a lot of more energy.

I have updated quite a few pics of recently and not so recently painted figs. More Waaaaagh