In game 2 I faced Daemons of Chaos. Scenario was Blood and Glory. My opponent had 7 points, I had 6 points on field. Armies were breaking at 4 points.

Deployment was pretty simple. Immune to psychology and random movement units on flanks, rest of the army in the middle with hard hitting units in the front and Arrer Boys partially behind facrificial goblin unit blocking it from going crazy from Siren Song. Opponent was really short on drops compared to my 13 drops and I got small edge on deployment. 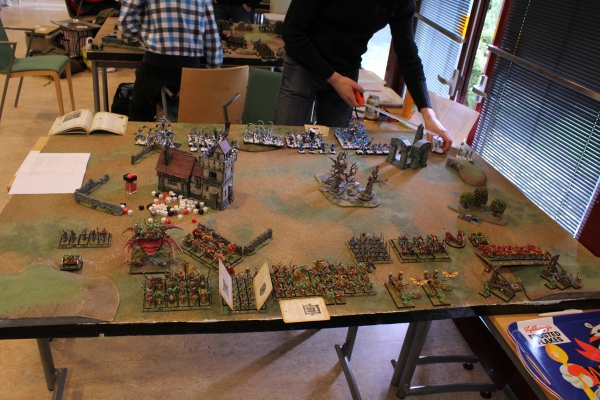 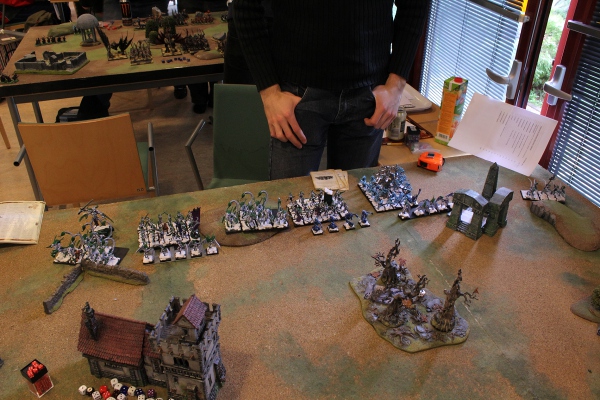 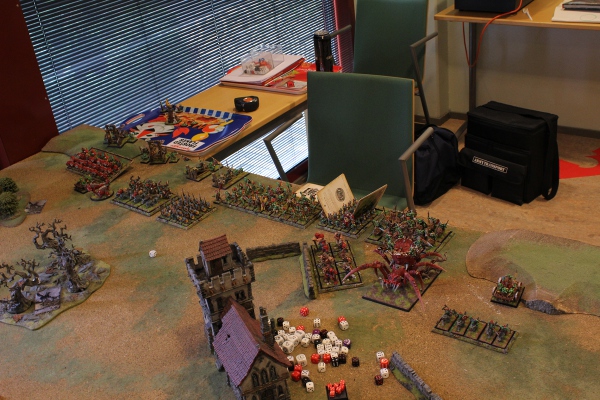 Orcs moved forward a bit and Arachnorok toke its position behind building.. Arrers were too far away to get a shot at enemy so it it stayed put. Pump Wagon on right flank reached vanguarded Seekers of Slaanesh and run over three taking wound in return. Artillery gave KOS some hot time. It catched one stone from Rock Lobber, failed Ward Save but toke only one wound. Other rock Lobber missed and guided Doom Divers kept KOs busy dodging falling goblins.

Daemons got forward cautiously. KOS walked beside the buiding boldly as 'come on little spider, I'll eat you breakfast'. 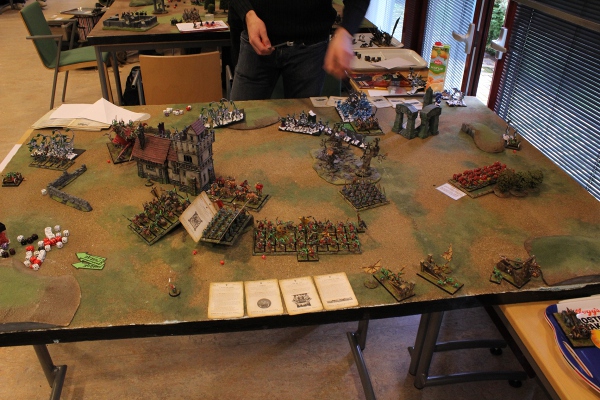 Arachnarok charged KOS, Wolf Chariots charged Flamers and Wolf Riders rode to harrass Fiends and rest stayed relatively stationary. Magic and shooting were pretty meaningless. In close combat Wolf Chariots killed Flamers on impacts and overrun to Horrors. KOS were on taking side. First KOS drained one wound from Arachnorok, then Arachnorok cut KOS down with help of Venom Surge and overrun on Daemonettes flank.

Game was over for Daemons but tournament rules gave possibility to even points if orcs were broken in later turns. Fiends charged on Wolf Riders, cut them down and overrun on Pump Wagon. Horrors gave Wolf Chariots so hard time that those broke and were cut down with 10 inch pursuit. Arachnorok sliced Herald of Slaanesh BSB and half of his unit. 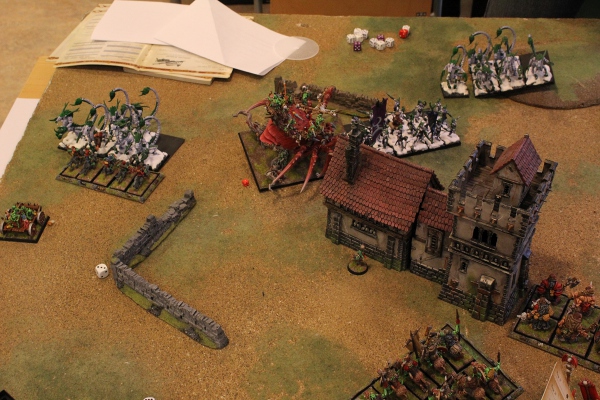 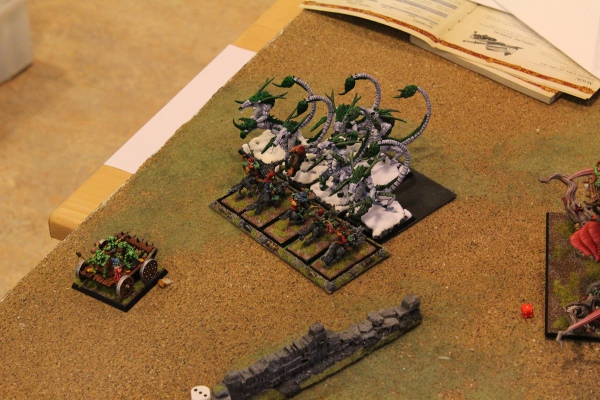 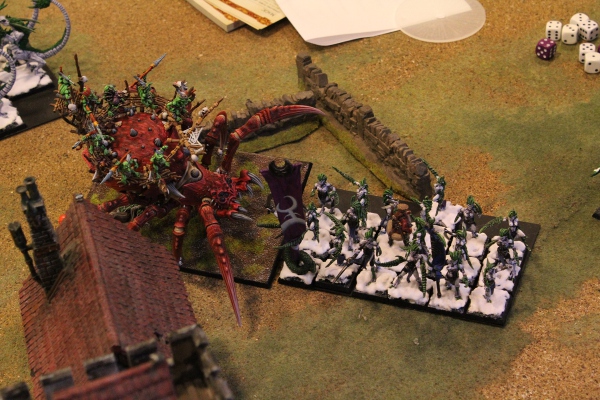 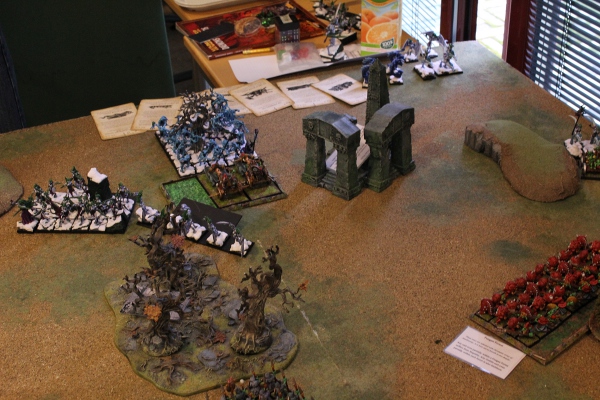 Boar Boys charged on the Fiends flank. Rest of the army stayd put. Magic and shooting were insignificant. Arachnorok grinded Daemonetes down by some. Boar Boyz killed two Fiends and third one crumbled on resolution.

Other Fiend unit charged Trolls. Rest of the Daemons walked forward. Trolls toke Fiends easily, lost one wound and killed two Fiends in return. Arachnorok wiped rest of the Daemonettes down and toke aim on next Daemonette Unit. Fiends on left flank were losing to Boar Riders. 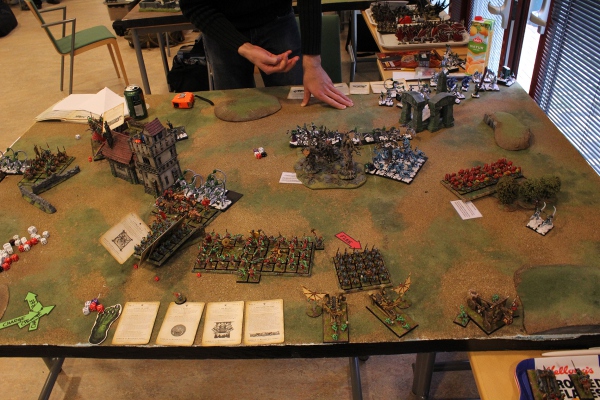 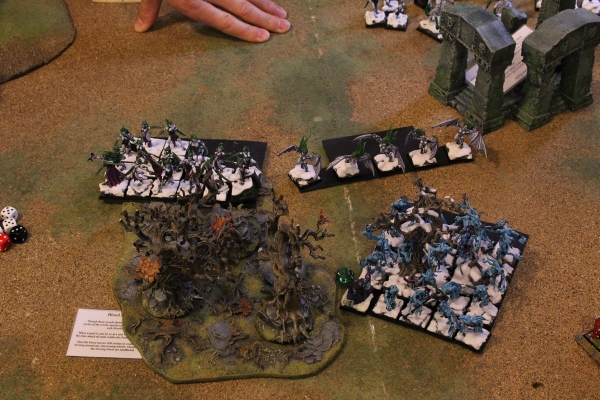 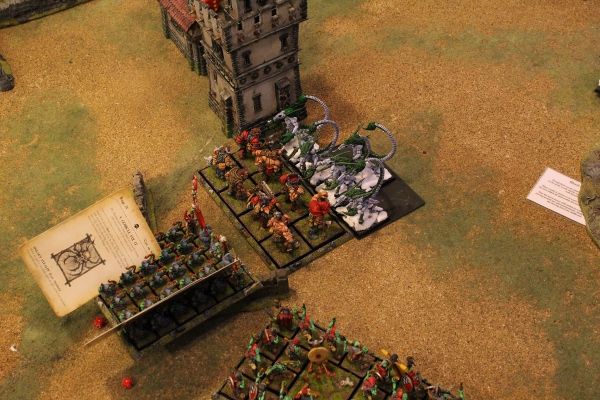 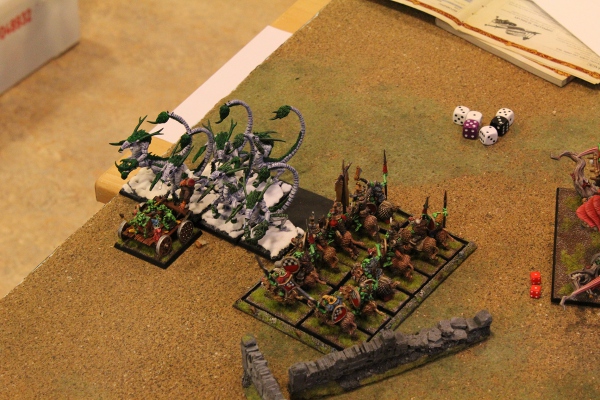 Opponent called it a game and conceded. There were no way to kill orc general or wipe two units with rest of the army. Orcs had lost only two Pump Wagons, Wolf Chariots and Wolf Riders so far. Orcs win 10-0.