Unit has reached strength of 16 brave brutes. Waaaaagh is growing slowly but steadily.

Second month of ToEG has passed. I ended up with approximately 800 points worth of tyranids painted.(pics here)

First Arrer boyz are also finished. I think they got pretty. You can judge arrer boyz here

These toke quite lot of time, but I think those turned out quite nice. Here

I got bitten by Warhammer virus and was lured to paint something in 28mm. Those ended up here.

I also updated tyranids section because I am taking part in Tale of Epic Gamer 2010.

Roads are finally ready. Those roads toke quite an effort to finish. I toke some photos on a Blood Bowl field so that I didn't have to set up whole gaming table. Pictures can be found in the Roads section.

Lunatix have struck again. Saturday was the day, when we built roads to be used with Epic Armageddon. 4 crossroads are prototypes from previous weekend. Rest of the roads are new. Pics can be found in the WIP section.

First four forest bases are ready. Another set is under construction.

After inspecting scenery, we found out that we need roads. Buildings wont grow up into wilderness by itself. First road pieces constructed. Painting on the way.

Few nice pics about our new buildings on Buildings page.


What is this madness?

It is now official that I have graduated as Bachelor of Engineering(Information Technology).


Slow pace is better than no pace at all

Two more days till I get my papers out from school and one era of eternal student ends.

I bought new camera just for myself. Wife wont get her hands on this one so this wont end up rolling on the floor like old camera did. My new toy is Canon EOS 550D.

Ebay is dangerous place to spend time in. My weak mind spotted pile of tyranids which I was forced to purchase! That pile arrived last week. Since then I have been cleaning and prepping more tyranids. Current count on tyranids break 28 000 pts on E:A tyranids 9.2.1 development list. Guess I have enough those.

I have left my graduation paper for language inspector for final checking. I have passed my maturity exam and I have kept my grad presentation too. Minor stuff and paper work left, wheee!!

I have been cleaning tyranids that I have been shopping from ebay. Spent 500e on toy soldiers. Please, don't tell my wife. :) Ah, there's also three new wip buidings.

Added some pictures of painted units in the space marines and eldar sections. 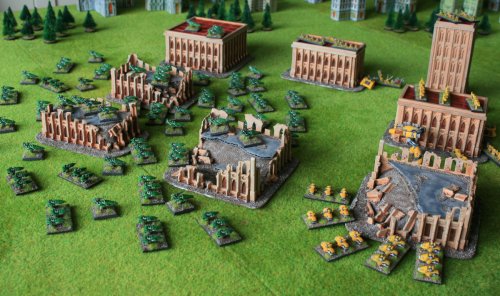 With sneaky approach my studies are finally coming closer to end after too many years of students life. Final study is almost ready and I should leave it to teacher for checking in a few days. After that I'll concentrate on fixing minor stuff and getting it into covers.

Sneaky orks have infiltrated into the armies section, although those are still WIP.

Scenery pages are forming up. Pages need more restructuring but we wont let that hold us back.

First pictures of finished scenery are there for you.


Another day and another site is born.

This here site will eventually contain all sorts of Epic Armageddon related stuff as soon as we're properly up and running. At the moment things look a bit bleak on the content department but hopefully the situation will be rectified in the coming months, and maybe there will even be a report of a fully painted 40000 point Epic battle in the distant future.