I finished my hellcannons base with small exception because I don't have burnt and pale static grass. I need to shop some.

I may have been too restricted with stone slabs on base. Those were stupid easy to make and paint and on finished model those look pretty beautiful. How? Just press small dent on blister cover, mix slightly uneven plaster and pour 2-3mm thick layer into that dent. Let it dry, break, glue, paint. Painting was made over blue-gray mix made from chaos black, regal blue and skull white. Drybrush with kommando khaki and very carefully on edges with skull white. Bam, there you go. 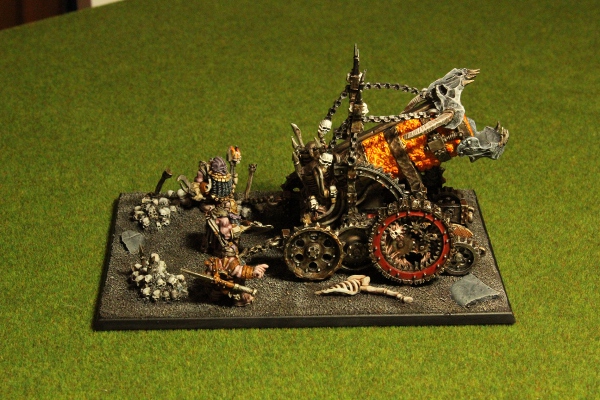 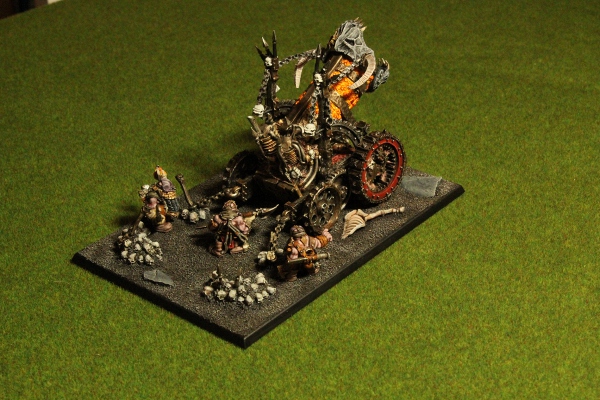 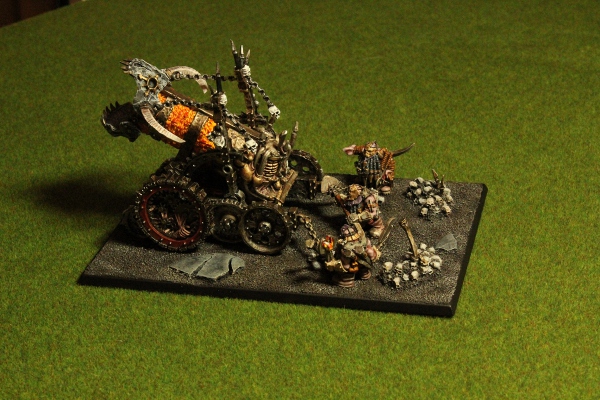 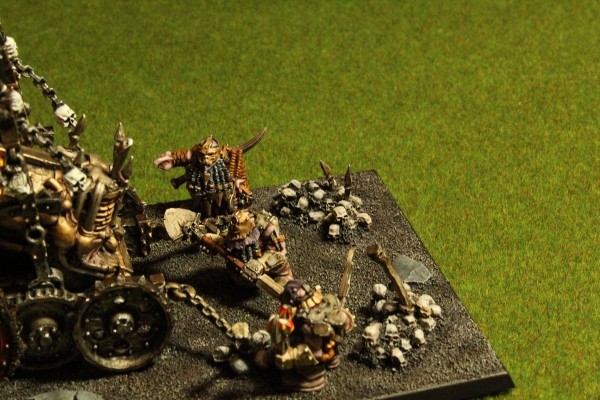 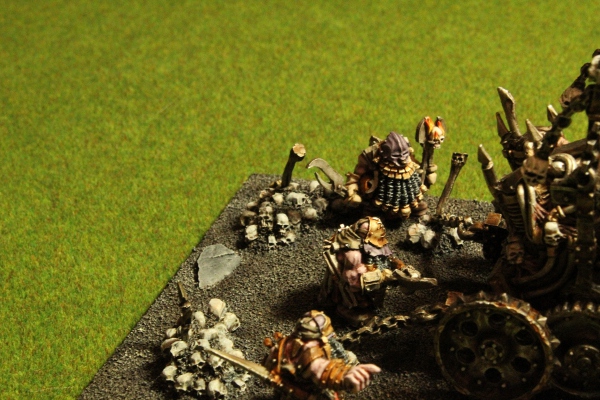 My order from Forge World came this week. For my shock, the gentleman from UPS had left my 400 pound order on my porch under bench without calling me. He had left small hand written note in our letter box about the whereabouts of my order. Yea, thats what I call a service, ##&!& pro!! Luckily order had everything that I ordered intact and in good shape.

My chaos dwarves got enforcements as listed: Daemonsmiths, 40 infernal guards, 3 command units two are for IG's, one is planned as extra characters), magma cannon and rocket launcher. Those are enough for Border Patrol sized games (1200pts). BP list needs bull centaurs for more competitive list. BC's, K'daais and more CD toys will be on my next order after I get these painted.

I have washed my figs with Fairy and water so that I get rid of releasing agent used in casting process. First troops have been cleaned but weapons, shields and base are still not glued on. There were discussion on Chaos Dwarf Online about these figs fitting badly on 20mm bases so I wanted to be sure, that I get my figs in rank formation. I'll take my time on getting those in line.

Base for Hellcannon is getting texture and details and should be ready in day or two. I need to solve where to get dry burnt static grass for it as I got only green one. 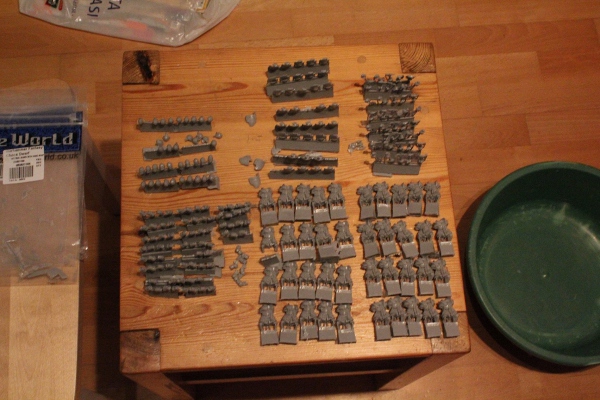 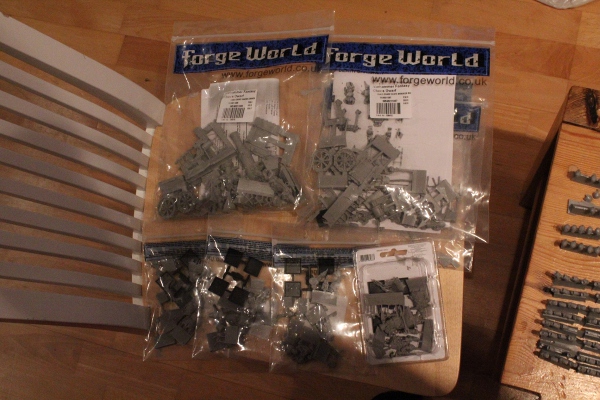 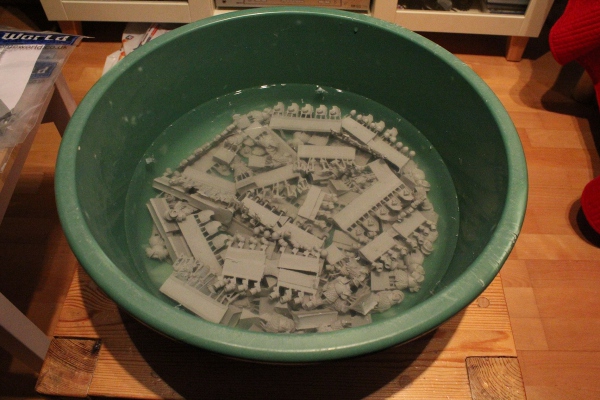 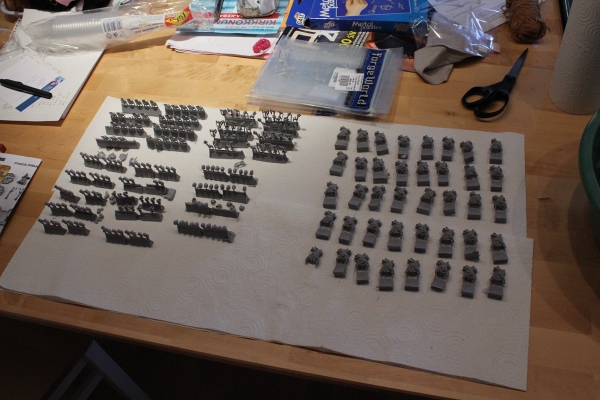 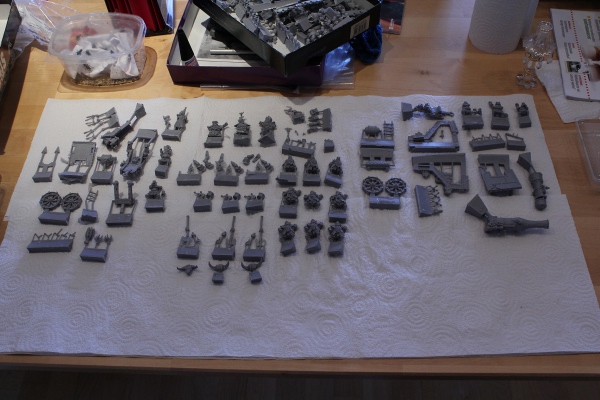 Quick update. I finished painting crew and chase them over Tamurkhan for shots! (gasp) They survived camera ;-D 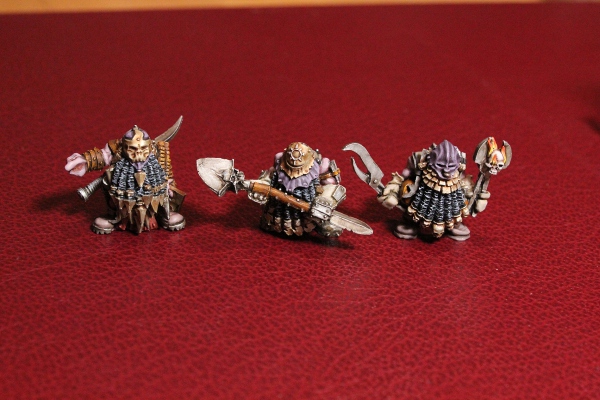 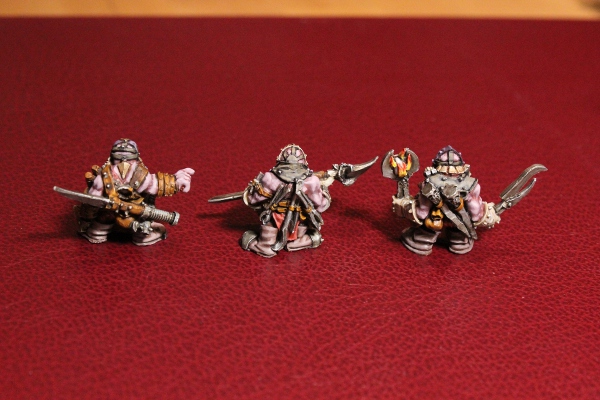 Hellcannon is getting ready. Cannon itself is almost finished. It is painted but I don't like how its barrel looks from inside. Crew is needs about two hours to a point when I can call them finished.

Base is still unfinished. I haven't chosen if I will go to common lava base or barren scorched earth with pale burnt static grass on dark-gray-brown base. The lava base won't feel right, no living humanoid would live in such environment. Daemons maybe, but we are talking about dwarves regardless they are chaotic ones. 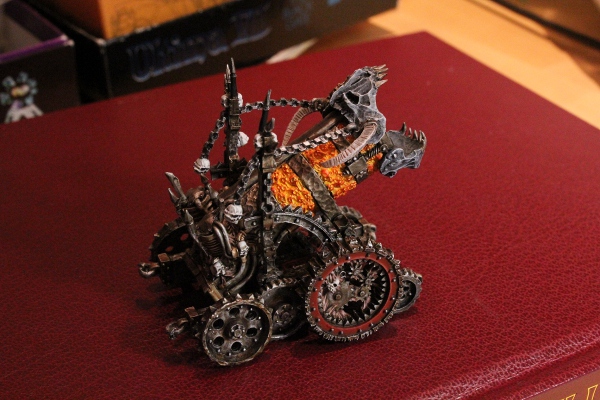 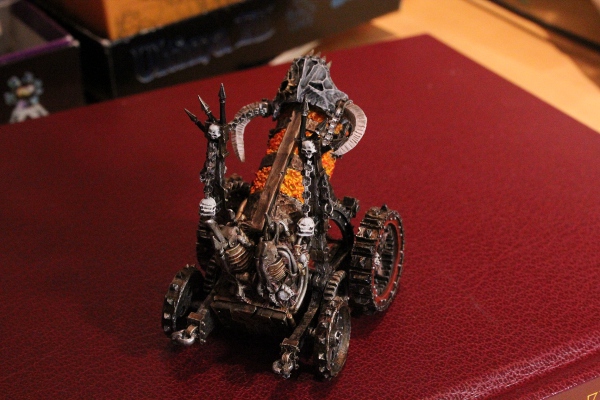 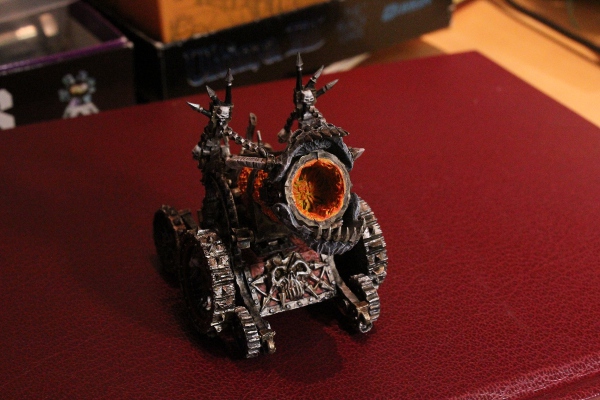 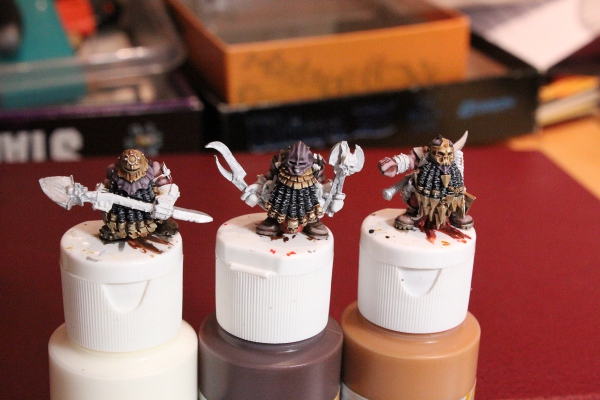 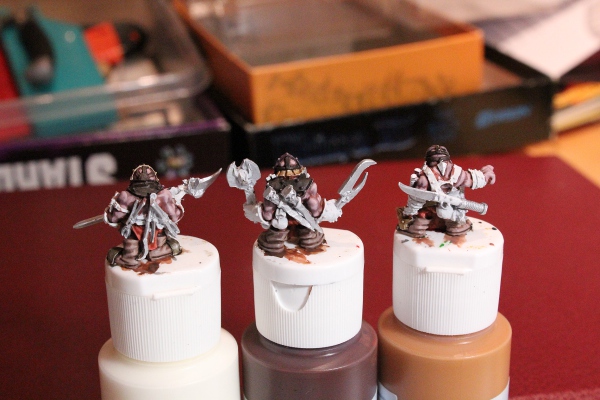 Chaos Dwarf fly has bitten me. I want CD army badly and I will get one! On early '90s I missed my change to build CD army and soon after Games Workshop refuced to introduce them again into Warhammer. Now, almost 20 years later Forge World brought them back in Tamurkhan the Throne of Chaos -campaign book. Rumours tell that badly needed units are being released in next few months so now is a good time to start. I'll get rank and file troops now and few war machines now and bull centaurs and K'daai later. Propably in three or four patches so that I don't need to buy insane piles of figs in a one go.

I was able to obtain two Hellcannons and I started painting one right away. Here are few WIP pictures. You can get bigger pictures just by pressing chosen picture. 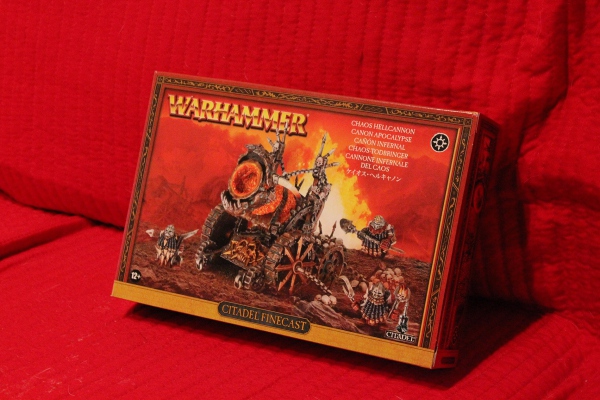 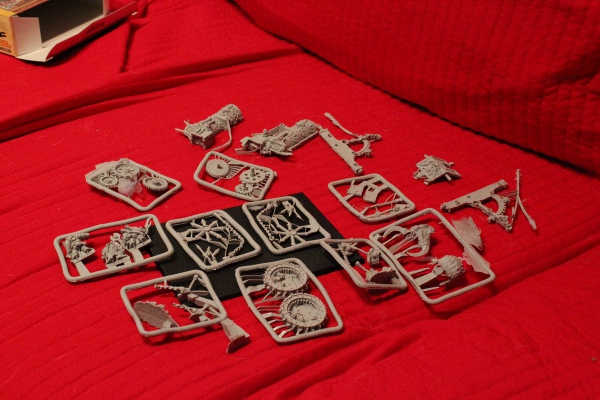 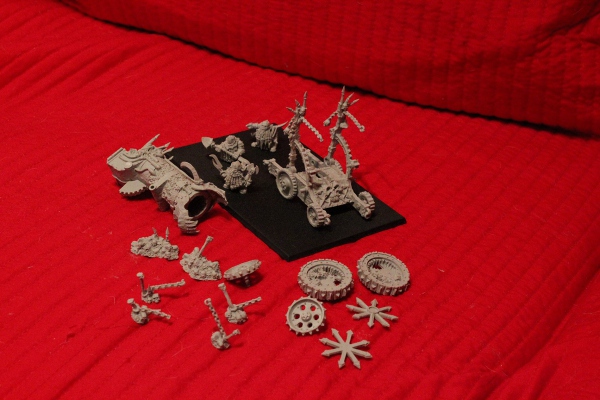 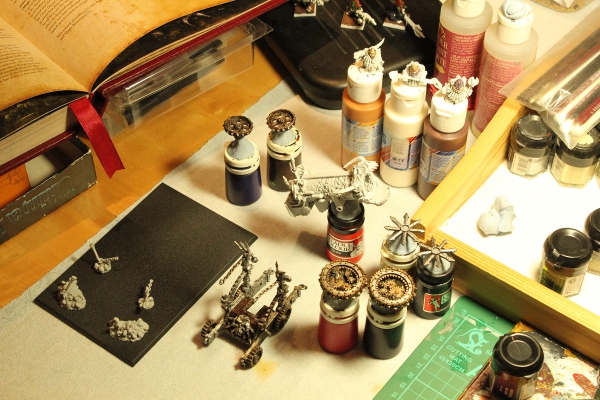 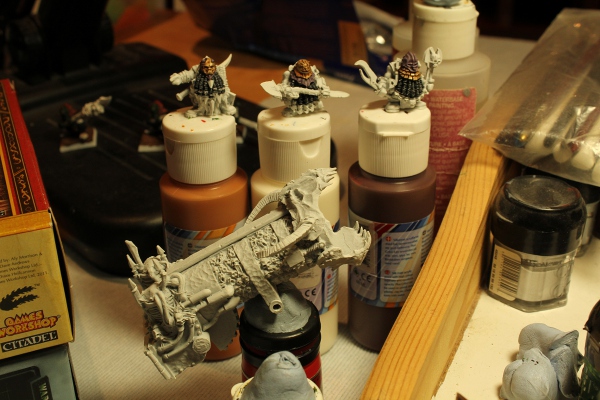 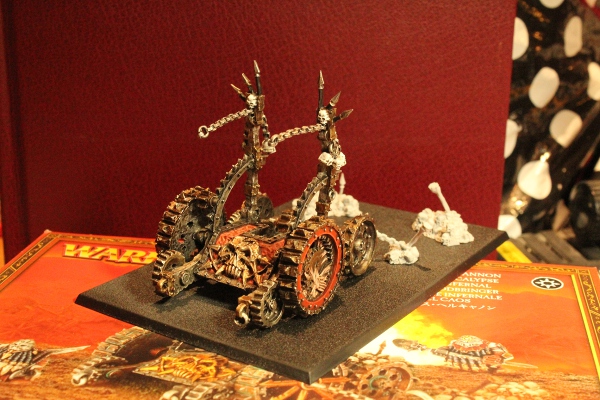 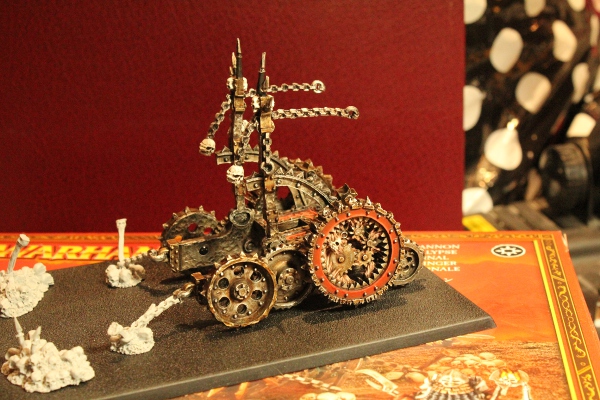 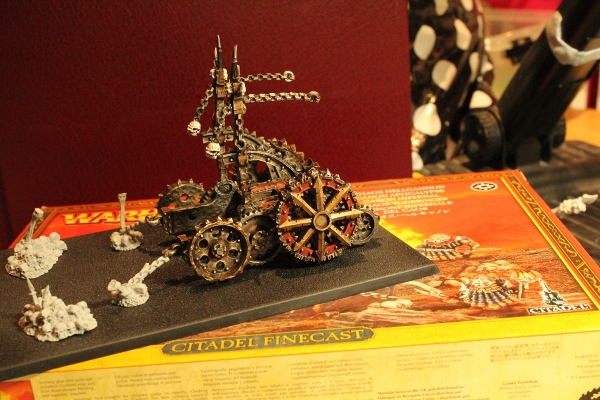